Woods’ political activism is unique, almost renaissance-like, ranging from personal testimony and community development to political presentations in venues as diverse as the Maraki Vanuariki Council of Chiefs in Port Vila (Vanuatu) and the George Mason University in Fairfax Virginia (USA). He was the only foreign witness to the massacre at Cendrawasih University in 2006, which on his return to Melbourne hit the front page of The Age (Cover-up fear over dead in mine riot, 27 March 2006, Andrea Jackson).

Woods is also an artist of some distinction, the focus of fifty large-scale paintings almost entirely on revolutionary West Papua. His first painting was of two highland women he’d photographed in West Papua in 1980 while he and his family were on a camping trip in Manokwari. This was exhibited at St Francis Catholic Church in Melbourne in 2001 as part of a special mass for West Papua led by Bishop Hilton Deakin (himself renowned for leadership in Australia of East Timor’s quest for liberation from Indonesia) 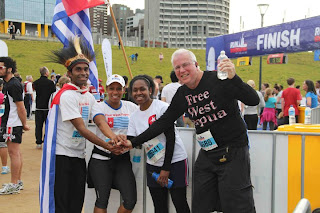 Woods’ portrait of Jacob Rumbiak, the West Papuan independence leader who has lived in Melbourne since escaping from jail in Indonesia, was entered in the 2009 Archibald Prize, and exhibited at Smart Artz Gallery’s ‘Hidden Faces of the Archibald 2009’ (salons de refuses) in South Melbourne.

His latest effort in revolutionary art is a West Papuan take on Eugène Delacroix’s Liberty Leading the People, that will be part of a major exhibition in October that will focus on West Papuan women, the hidden heroes of the independence struggle.

Every year since 2007, the United Nations Permanent Forum for Indigenous people holds meetings to discuss issues that are important to indigenous people of the world. It is an opportunity for us West Papuans to express our views and concerns, and to remind the United Nations of what happened more than five decades ago in West Papua under the New York Agreement (NYA), which was signed on August 15, 1962, and continued on in 1969 under the sham election known as the ‘Act of Free choice’. The result of this betrayal is the colonial occupation of our people and the destruction of our lands and natural resources. Our people were denied the “One man one vote,” which was agreed on in the New York Agreement (NYA). It is our duty to remind the UN of this history when we get the chance. The UNPFIII focuses on three things that affect indigenous people across the world: conflict, peace, and resolution. It gives indigenous people from around the world a voice – an opportunity to raise their conce 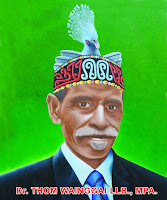 WEST PAPUA - Remembering Dr. Thom Wainggai on the day he left us – March 12

28 years ago, I stood at the Mandala stadium in Jayapura in awe as if I was in a scene of a violent war movie. It was not a soccer event, rather it was the day I witnessed the beginning of the end of one of my heroes – a man revered by many, Dr. Thom Wainggai (known to many as Dr. Thom). That day, Dr. Thom and his wife, alongside 70 tribal leaders raised the West Melanesian flag (West Papua) and were brutally arrested by Indonesian police officers and soldiers. It was the last time he made a bold stand against Indonesian imperialism. I won’t forget that day. I grew up in West Papua in a land occupied by a strange by a different ethnic group – Indonesians. We were taught to read and write in the Indonesian language, speak Indonesian (Javanese) in public and in our communities. We learned to sing the Indonesian national anthem, learned Indonesian poetry, history, political and legal systems. We eat, drink, go to school, and learn to be faithful Indonesian citizens. We grew up believing