WEST PAPUA : THIS IS A DOCUMENTARY ABOUT NON-VIOLENT RESISTANCE, COURAGE IN AN UNDECLARED WAR

October 13, 2011
WEST PAPUA—A JOURNEY TO FREEDOM encapsulates the political activism of Herman Wainggai, a young West Papuan independence leader and mentor of the non-violent students movement in West Papua, as he journeys from Melbourne, Australia, to an isolated refugee camp on the north coast of Papua New Guinea. There under gentle coconut palms, in crystal blue waters, he deliberates with colleagues from the West Papua National Authority who’ve managed to escape from their occupied homeland for the week-long meeting. 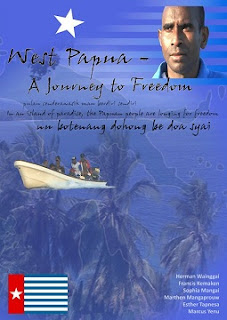 Herman has spent years working for the liberation of his homeland paradise and was twice a political prisoner of the Indonesian Republic. Four years ago he and forty-two other West Papuans, including seven children, journeyed to Australia on a traditional double-outrigger canoe. Their odyssey, circumnavigating West Papua, crossing the treacherous Arafura Sea, beaching on the west coast of Cape York Peninsula, impressed the global media, and when the Australian government recognized their application for asylum, the Indonesian government recalled its ambassador from Canberra.
This is a documentary about non-violent resistance, courage in an undeclared war, loneliness in exile. It’s about family, friendship, love, human rights, and great singing.