October 19, 2011
Within the past 24 hours the historic meeting of the Third Congress of West Papua and the thousands of citizens that came to support their future government have come under severe threat by a sudden large military build-up by Indonesia in Jayapura.  It’s shocking to see Papuan citizens in the streets with empty hands while tank after tank drives by followed by truck after truck filled with Indonesian soldiers. It is as though they are preparing for a war but their war would be fought against unarmed civilians who are congregating in a peaceful manner.
Why is Indonesia so threatened?  Could it be that they are fearful because they see that brick by brick Papuans are creating political space for further opportunities to state our case and substantiate our declaration that we are ready for independence with self-determination?

The build-up of the military is a response to feeling threatened by Papuan’s recent successes.  Be cautioned West Papuans, a common response to threat is violence against those they feel threatened by.  This is a highly volatile situation and we must all be diligent in keeping the international community informed about this dangerous situation; Papuans are depending on us.
Clearly lives are in extreme danger for practicing their rights as citizens of a democratic nation. This includes the right to gather nonviolently and the freedom of expression. So I ask the international community and in particular the United States, Australia, and Indonesia, where is this phantom democracy and its principals that you claim are ours as citizens of a supposed democratic country? 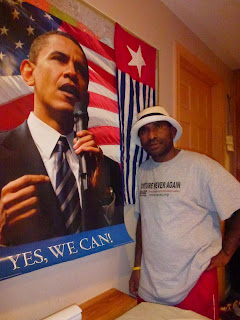 We are told that Indonesia’s democracy allows us the right to gather and express ourselves freely in a nonviolent manner, we follow the rule of law and suddenly we have tanks bearing down on us.  This hypocrisy needs to be exposed and recognized before more innocent lives are extinguished.
President Obama, we ask you, and your administration, to rest on your laurels and please speak out against this aggression by the military.  You have been granted the power of audience and we ask you to respect this power and challenge Indonesia’s abuses and help diffuse the danger Papuans are facing at this moment.  Please don’t let it be that only a massacre will inspire you to challenge Indonesia with due diligence. You are better than that.